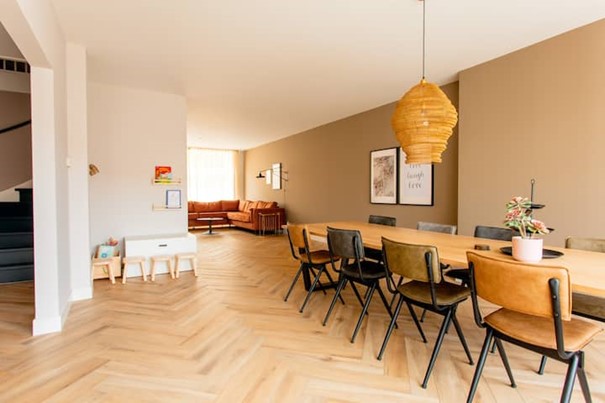 The Netherlands is known as the country that conquered the sea, with our beautiful dunes, wonderful coast and many polders we have crafted our own country. The most recent and largest proof of this is Flevoland, but our ancestors also reclaimed a lot from the sea, large parts of Zeeland, South-Holland and North-Holland were still under water in 1300. The map below shows this very well. So these areas are almost “extra” Dutch, made for and by us. Do you know what is also made by ourselves? Our luxury vacation home in South-Holland, a beautiful mansion for up to 8 guests.

The link is perhaps somewhat far-fetched, but certainly present. This beautiful luxury vacation home in South-Holland is located by the sea, right in the harbor of Oud-Beijerland, in a street where you can walk right up some small dunes. It really is a wonderful luxurious home perfect for large families of 8 or 6 people. It has been recently renovated and fully equipped. As a private customer, you can do perfectly well here. It is a very spacious house, with 4 bedrooms, 1 with bunk beds and the other 3 with lovely hotel quality box springs. It has a large modern kitchen and a lovely private backyard, with sitting area and more.

The location is unique, located in the harbor by the water and near several restaurants, supermarkets and stores. This water flows straight to the sea which makes this beautiful mansion a wonderful vacation home by the sea in South Holland. There is also free parking in the nearby parking lots, perfect to have the car close by to go to the beach. A nice location to visit for example with the dog is the Maasvlakte, to see with your own eyes how the Dutch dunes have been made and more land is and has been created. And to get a breath of fresh air and have a great walk with the dog of course.

The land reclamation of the south and the rest of the country is really quite interesting, and was done in several phases. This can be seen beautifully in the beautiful video below left, in addition to an overview of the final result.

A nice saying you sometimes hear online and abroad is:

“God created the earth, but the Dutch created Holland.”

Of course, this is only true to a certain extent, but it is impressive, because from the data of these maps it has been deduced that the Netherlands currently consists of as much as 17% reclaimed land. This was done at the time for various reasons, but mainly to create more land for agriculture. For this purpose many polders were used, a technique revolutionized by the Dutch. This land and especially the coast had to be protected by several dams, dikes and dunes, which the Dutch have become very good at. Thus, the afsluitdijk made, the longest dike in the Netherlands that the IJsselmeer and the sea split, a separation between fresh and salt water. It also connects North Holland, where we have a beautiful 10 person vacation home and Friesland, where we have a lovely vacation home with jacuzzi.

The Afsluitdijk made the creation of Flevoland possible. But did you know that originally Flevoland was not the only area meant to be landed? The Markermeer, to the south east of the IJsselmeer, was originally destined to be poldered. The dike necessary to keep out the water was even built, the Houtribdijk, also known as the Markerwaardijk or Enkhuizen-Lelystad dike. This ultimately did not happen, due to a number of circumstances.

The main reason for this is that the order of reclamation went differently than planned. Originally, a small part of Flevoland was to be reclaimed first, followed by the area along the western coast of the IJsselmeer. This did not happen because more agricultural land was rapidly needed, so first the east coast was poldered. During this process several movements arose to preserve the marker lake, with motivations like keeping the harbors of Enkhuizen and Hoorn at large open water, but also environmental activists. The environmental activists can rejoice, because in 2019 a beautiful nature reserve was created: Natuurgebied Trintelzand.

Together, this has caused the Houtribdijk and the Afsluitdijk to actually have the wrong names now, because they are actually both dams. A dike keeps water away from land, but a dam separates water from other water. Would you like to enjoy the hard work of our ancestors in luxury? Then book a wonderful vacation home in South-Holland.

This website uses cookies to improve your experience while you navigate through the website. Out of these, the cookies that are categorized as necessary are stored on your browser as they are essential for the working of basic functionalities of the website. We also use third-party cookies that help us analyze and understand how you use this website. These cookies will be stored in your browser only with your consent. You also have the option to opt-out of these cookies. But opting out of some of these cookies may affect your browsing experience.
Necessary Altijd ingeschakeld
Necessary cookies are absolutely essential for the website to function properly. This category only includes cookies that ensures basic functionalities and security features of the website. These cookies do not store any personal information.
Non-necessary
Any cookies that may not be particularly necessary for the website to function and is used specifically to collect user personal data via analytics, ads, other embedded contents are termed as non-necessary cookies. It is mandatory to procure user consent prior to running these cookies on your website.
OPSLAAN & ACCEPTEREN